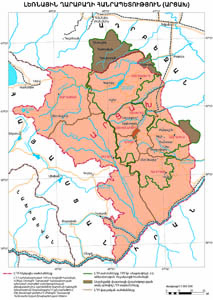 Artsakh (Karabakh) is an integral part of historic Armenia. During the Urartian era (9-6th cc. B.C.) Artsakh was known as Urtekhe-Urtekhini. As a part of Armenia Artsakh is mentioned in the works of Strabo, Pliny the Elder, Claudius Ptolemy, Plutarch, Dio Cassius, and other ancient authors. The evident testimony of it is the remained rich historic-cultural heritage.

In following centuries, Artsakh fell under the rule of various conquerors, remaining Armenian and having a semi-independent status. Since the mid-18th century the invasion of Turkic nomadic tribes to the north of Karabakh began, which led to clashes with local Armenians. During this period, the five Armenian melikdoms (Hams) are memorable which had reached the peak of their prosperity and power in the late 18th century. At the end of the Russian-Persian War of 1804-1813 and by the Gulistan treaty of 1813, Artsakh-Karabakh was annexed to Russia.

Nagorno-Karabakh conflict began in 1917, during the formation of three ethnic republics of Transcaucasia - Armenia, Azerbaijan and Georgia, as a result of the collapse of the Russian Empire. The population of Nagorno-Karabakh, 95 percent of which were Armenians, convened its first congress, which proclaimed Nagorno-Karabakh an independent political unit, elected the National Council and the Government. In 1918-1920 Nagorno-Karabakh had all the trappings of statehood, including the army and the legitimate authority.

In response to the peace initiatives of the people of Nagorno-Karabakh, Azerbaijani Democratic Republic launched a military action. From May 1918 to April 1920, Azerbaijan and military units of Turkey, which supported Azerbaijan, used violence and carried out massacres against the Armenian population (in March 1920 about 40,000 Armenians were killed and deported only in Shushi). But it was not possible to make the people of Nagorno-Karabakh obey Azerbaijan's power in this way.

In August, 1919, in order to prevent military conflict, Karabakh and Azerbaijan, signed a preliminary agreement by which they agreed to discuss the problem of the status of the region at Paris Peace Conference.

Response of the international community is memorable. The League of Nations rejected the request for Azerbaijan's membership, citing the fact that it is difficult to define clear boundaries and territories under the sovereignty of this state. Among other contentious issues there was the issue of the status of Nagorno-Karabakh. Because of the sovietization of the region the issue fell out of the agenda of international organizations.

The establishment of Soviet rule in Transcaucasia was accompanied by the creation of a new political system. Nagorno-Karabakh has been recognized a disputed territory between Armenia and Azerbaijan also by Soviet Russia. According to the agreement signed in August 1920 between Soviet Russia and the Armenian Republic, Russian troops were temporarily deployed in Nagorno-Karabakh.

Immediately after the establishment of the Soviet regime in Armenia, on November 30, 1920, the Azerbaijan Revcom (Revolutionary Committee - the main Bolshevik instrument of power at that time) made a declaration recognizing territories over which Azerbaijan had claims - Nagorno Karabakh, Zangezour, and Nakhijevan, as inseparable parts of Armenia.

The text of the decree issued by the Armenian government was published in both Armenian and Azerbaijani media ("Baku Worker" organ of the Central Committee of the Azerbaijan Communist Party, June 22, 1921). Thus, a legal confirmation of the unification of Nagorno Karabakh to Armenia took place.

Within the context of international law and norms (in the international legal sense), it was the last legal act on Nagorno-Karabakh during the communist regime.

Ignoring the reality, on July 4, 1921, in the capital of Georgia, Tbilisi, the Caucasian Bureau of the Communist Party of Russia convened a plenary session, during which the fact that Nagorno-Karabakh is part of the Armenian SSR was reconfirmed. However, under the dictation of Moscow and Stalin's direct interference, on the night of July 5 the decision of the previous day was reviewed and the forced decision of incorporating Nagorno-Karabakh to Azerbaijan and forming on its territory an autonomous oblast was made, not even keeping procedure. This decision is an unprecedented legal act in the history of international law, when the party organ of a third country (RK(b)P) without any legal basis or authority determines the status of Nagorno-Karabakh.

In December, 1922 Azerbaijani and Armenian SSR were included in the formation processes of the USSR, and only on one part of the territory of Karabakh on July 7, 1923, by decision of the Central Executive Revolutionary Committee of Azerbaijan SSR the Nagorno-Karabakh Autonomous Oblast was formed, within Azerbaijan SSR, by which, in fact, the Karabakh conflict was not resolved, but temporarily frozen. Moreover, everything was done so that Nagorno-Karabakh Autonomous Oblast had no common border with Armenia.

But during the entire Soviet period, the Armenians of Nagorno-Karabakh never put up with this decision, and for decades struggled for reunification with the motherland.

During the entire period of being of Nagorno-Karabakh Autonomous Oblast within Azerbaijan SSR, the leadership of this republic had been regularly and consistently violating the rights and interests of the Armenian population. Discriminatory policies by Azerbaijan against Nagorno-Karabakh was reflected in attempts of artificially suspending the social-economic development of the region, turning it into a raw materials appendage, actively intervening in the demographic process aimed at ethnic cleansing, destructing and misappropriating Armenian monuments and cultural values.

Discrimination from Azerbaijan towards Nagorno-Karabakh had its impact on the population of Karabakh and became the main reason of latter’s migration. As a result, the correlation of the Karabakh population changed: if in 1923 Armenians amounted to 94,4 percent of the population of Nagorno Karabakh, according to 1989 statistics the number of Armenians had reduced to 76,9 percent. The policy of ethnic cleansings had more success on another Armenian territory, in Nakhichevan.

The people of NKAO and authorities of Armenian SSR had sent lots of applications to the Soviet central authorities asking about the reconsideration of the decision on incorporating Nagorno-Karabakh to Azerbaijan, which were ignored or rejected, causing persecutions against the initiators. Among these applications are the application of the Government and the Communist Party Central Committee of Armenian SSR from 1945 to the Government of the USSR and the All-Union Communist Party Central Committee, more than 2.5 thousand in 1963 and more than 45 thousand signed letters in 1965 from the NKAO population addressed to Soviet leadership, offers of NKAO working groups within the USSR-wide discussions on a new constitution in 1977.

The current phase of Nagorno-Karabakh conflict began in 1988, when in response to the self-determination claims of NK population the Azeri authorities organized massacres and ethnic cleansing of the Armenian population on the entire territory of Azerbaijan, particularly in Sumgait, Baku and Kirovabad.

On December 10, 1991 NK population declared the establishment of the Nagorno Karabakh Republic (NKR) by plebiscite, which fully complies with both international law norms and the letter and spirit of the USSR laws of that time. Thus, on the territory of the former Azerbaijani SSR two equal state formations were created - Nagorno-Karabakh Republic and the Republic of Azerbaijan.

In Nagorno-Karabakh and surrounding areas populated by Armenians the policy pursued by Azerbaijani authorities turned into overt aggression and large scale military actions against the Republic of Nagorno-Karabakh, which resulted in tens of thousands killed and caused considerable material damage.

Because of the war Azerbaijan occupied the whole region of Shahumyan, and the eastern parts of Martakert and Martuni regions of Nagorno-Karabakh. Neighboring districts went under the control of Nagorno-Karabakh armed forces, which played a role of a security buffer to block the further firing from the Azeri side towards Nagorno-Karabakh settlements.

In May, 1994 Azerbaijan, Nagorno-Karabakh and Armenia signed a ceasefire, which, despite violations, is still effective.