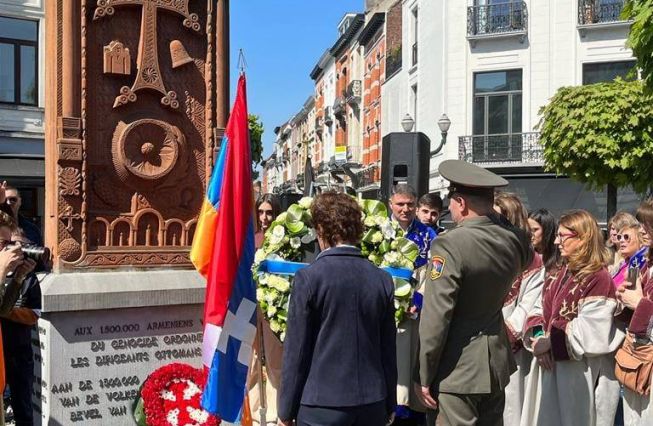 
A number of events dedicated to the 107th anniversary of the Armenian Genocide took place in Belgium.
On the morning of April 24, a liturgy in memory of the Holy Martyrs of the Armenian Genocide was held at the Armenian Apostolic Church of St. Mary Magdalene in Brussels.
A memorial service was held at the khachkar-memorial in Henri Michaux Square, in Brussels. Wreaths were laid on behalf of the Armenian Apostolic Church, the Embassy of Armenia, the Senate and the House of Representatives, Belgian political parties, the International Research and Genocide Network, a number of NGOs and Armenian community organizations.
In her statement, Ambassador Anna Aghadjanian underlined that, as shown by the history, denial, impunity and indifference give birth to new crimes. She stressed that the prevention of genocides and the fight against xenophobia are among the important directions of the foreign policy of Armenia. The Ambassador commended all those political and public figures who, through their principled and thorough work, bring their contribution to the recognition and condemnation of the Armenian Genocide.
A procession then started from the St. Michael and St. Gudula Cathedral to the Turkish Embassy.
The Armenian Cultural Center of Brussels hosted a screening of a documentary, based on the memories of a survivor of the Armenian Genocide, and a classical concert.
The Boghossian Foundation also commemorated the Armenian Genocide with a thematic screening of “The Righteous Turks, a very long silence” documentary, followed by a conference.
Bernard Coulie, professor of philology and oriental history at the Catholic University of Leuven, was invited to the Belgian LN24 TV channel to talk about the Armenian Genocide.
Commemorative events also took place in Liège, Gent, Mechelen and other cities of Belgium.
share:
MFA RA
official website
Dual citizenship
Electronic visa
Visaapplications